skip to main | skip to sidebar

Succinic Acid is another name for Amber Acid that has been used in Europe as a natural antibiotic and general curative for centuries.

Natural Baltic Amber is high in Succinic Acid content and contains as much as 8 percent by weight. Succinic Acid is also a natural constituent of plant and animal tissues.

A powerful anti oxidant that helps fight toxic free radicals and disruptions of the cardiac rhythm, succinic acid has been shown to stimulate neural system recovery and bolster the immune system, and helps compensate for energy drain in the body and brain, boosting awareness, concentration and reflexes, and reducing stress. Succinic Acid

Even before mankind knew that there were things called acids antibiotics, the people of Europe recognized that amber had magical curative powers. They used it when we today would use an antibiotic.

Now that modern science has discovered what succinic acid can do, they have confirmed what the people of Europe have known for centuries.

The ancients wore natural Baltic amber necklaces and bracelets, made from amber stones and chips that washed up on the shores of the Baltic Sea, that were thought to have magical curative powers. They surely had no idea that they were high in succinic acid, but they knew they worked magic on their ills.

A Dominican Monk, Albert The Great, born in 1193, called Natural Baltic Amber Succinium and stated that it was the most effective of the leading medicines of the time. In order of effectiveness he listed them as Succinium, ocastoreum, mors, camphor, tartarus, and aurum. Amber tinctures were made from beer, wine and water. People found them effective against everything from stomach aches to rheumatism.

When the plagues devastated Europe during the middle ages, amber was used for fumigation. Burning amber is both aromatic and irritating. And that is due to the high content of succinic acid in the smoke.

The Prussian Priest Matthaus Praetorius recorded that in 1680, "During the plague not a single amberman from Gdansk, Klaipeda, Konigsberg or Liepaja died of the disease"

Even today aroma therapists use Amber smoke to cure people.

The people of Europe have used the curative properties of amber in many ways.

Recognizing its properties as an antibiotic, they have used, and continue to use it, for amber baby teethers, baby teething necklaces, spoons and pipe mouthpieces. Aristocrats of the 17 th Century brewed tea in special amber containers.

European scientists and military doctors lead the way in following up on the ancient knowledge. They found that it would help improve the bodies immune system after exposure to radiation from industrial accidents.

It has also been found to help the immune system combat infections, help cure hangovers and work against other toxins.

Research at the University of Hamburg, Germany confirms the safe and positive effects of succinic and fumaric acids in cellular metabolism.

Succinic acid is now produced commercially. And it is approved for use by the United States Food and Drug Administration.

Dr. Veniamin Khazanov of the RAS' Institute of Pharmacology at the Tomsk Scientific Center says "For aged people, succinic acid has proved to be indispensable. It is capable of restoring the energy balance at the cellular level, which is often upset as the years go by, and helps the patient regain his youthful energy." He says also that it has proven the equal or better of many commercial drugs and is significantly less expensive.

And once again following up on what the Europeans have known from their use of amber for centuries, science has found that it helps cure a hangover by helping the body rid itself of the toxins that cause the hangover. http://www.prweb.com/releases/2007/4/prweb517372.htm Deadly Hangover: Beyond the 'Morning After' 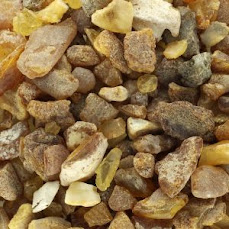